Dashawn Gilmore may be a pretty quiet kid, but it's not because he doesn't have much to say.

No, it would be a mistake to think that. Because while Gilmore – a sophomore at Southern Lee High School – isn't a real big talker, he expresses himself plenty through a variety of artistic pursuits. He creates pottery in his ceramics class. He's written songs and stories, he draws and he's active with his school's step team. Oh, and by the time this month is over, he'll be a twice-published poet. 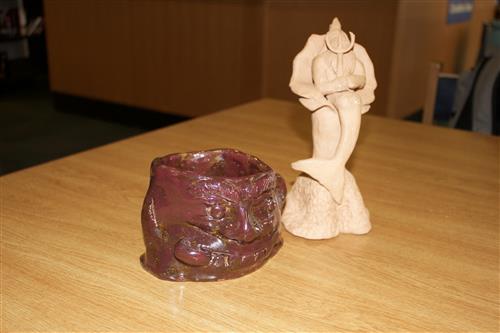 Gilmore's first instance of publication came in the spring of 2017, when his eighth grade reading teacher at West Lee Middle School gave him an entry form for National Poetry Month.

“Dashawn was in my class in eighth grade and wrote a five-page story that was just mind-blowing,” explained Helen Adams, now a speech therapist at the county's high schools. “It wasn't like something you would expect from an eighth grader. So when I got this entry form for National Poetry Month, he was the only person I wanted to ask. He's probably the most creative child I know.”

So Gilmore wrote his first poem, “Hope,” submitted it and didn't think much more about it. But not long after, Adams heard from an editor with the America Library of Poetry, who wanted to publish “Hope” in a collection called Treasured. By then, it was summer, school was out, and Adams didn't have a way to get in touch with Gilmore.

“I had to spend a few days tracking him down so he could sign the artist consent form,” Adams said with a laugh.

I am kind, I am smart

I believe I can achieve my dreams

I wish life was easy

Things get a little harder as you get older,

But education comes first and life gets bolder

If I could change everyone's life,

I'll make it easy for them,

My friends don't believe me when I say

"My future, my goals, I will reach," I think

Of it every day

Because I am kind, I am smart

Education is inspiring to me

And so is art.

For Gilmore, who was a freshman at Southern Lee by the time of the book's release, being published was something of a strange feeling.

“It describes situations that I'm in, easy or hard,” he said of the poem's content. “And when it was in a book, I felt famous, but like, in my own world. None of my friends really knew about it.”

After being published the first time, Adams – by now no longer Gilmore's teacher – said she'd make sure he continued to submit poems for National Poetry Month.

“The minute he starts writing, it just opens up a whole window to his personality,” she said. “I honestly don't know of many other kids who take the time to write about how they feel. So even though he's not mine anymore, he's getting one of these forms every April. I told him I'm paying for every copy of those books.”

And that was the case this year, when Gilmore wrote and submitted “Missing Piece.” And like in 2017, his poem will be published in a collection, this one called Futures, due out this month.

“It's just about parts of my life,” Gilmore explained in quiet fashion when asked what he wrote the poem about. “Just a good explanation of my life.”

Gilmore also said that he's grateful a teacher like Adams took note of his talents and pushed him to express himself.

“I'm thankful,” he said. “Most teachers probably have more serious things to deal with.”

With more than two years remaining in his high school career, Gilmore doesn't quite know yet what he wants to do after graduation, but he said he's interested in attending college and finding a way to continue using his artistic talents.

“I want to find a way to put everything together,” he said.

And for Adams, the opportunity to help a young artist grow has been beyond rewarding.

“He’s constantly coming up with new ideas which evident in his poetry and artwork. I think he will achieve great things in life and I hope to one day see his signature on a piece of art or his autograph in a book of poetry,” she said. “Dashawn Gilmore in one of my idols – someone who will express himself in any way possible and is willing to work as hard as he can to reach his goals.”