Just over a month ago, Southern Lee High School Assistant Principal Molly Poston was part of an elaborate plan to trick her boss, Principal Dr. Chris Dossenbach, into leading a meeting at which he would be awarded the district's Principal of the Year award.

“My meeting was hijacked,” Dossenbach said at the time. “It's hard to believe. My staff had to sit with me through two meetings knowing we weren't going to talk about any of that stuff.”

Well, Dossenbach was able to get his revenge on Poston, making her the subject of a little trickery herself on Tuesday. Instead of a meeting, she was called into the library to deal – she thought – with a couple of students who weren't behaving. Instead, she learned that the school's staff had gathered to honor her for being named the district's Assistant Principal of the Year. 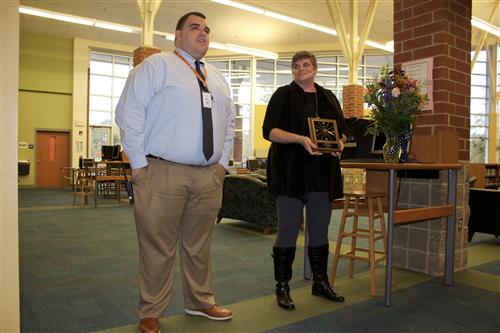 “I wore myself out planning his surprise,” Poston said in an interview this week. “And he certainly got me back.”

Poston said her surprise had to be a little different than Dossenbach's.

“Chris said he couldn't tell me it was meeting because I would have asked a million questions,” she said. “So they had to come up with something else.” 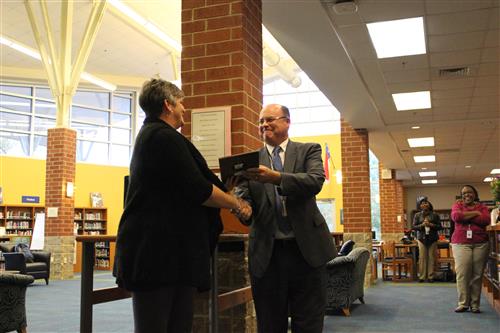 Poston began her career in education at an alternative school in Rocky Mount before coming to Lee County High School in the early 90s, where she taught science – including to a young Chris Dossenbach (“I vaguely remember him,” she said. “He was a good student and not the kind to get in any trouble.”). When the opportunity came to move to the then-brand new Southern Lee, she took it.

“I came to Southern willingly, and I stayed in the classroom here for about five more years,” she said. “I was a lead teacher for three or four years, and then I became an assistant principal – I think this is year six.”

For Poston, that classroom experience plays a vital role in her approach to administration.

“I would never trade my 16 years in the classroom because it has informed so much of what I do,” she said. “I'm very grateful because so many people have told me that it's hard to transition from the classroom into administration, especially in the same building. But it's been great for me, because this is such a great faculty, and we share so many of the successes we've had here.”

Poston is one of four assistant principals at Southern, and her responsibilities run the gamut from curriculum and instruction to working with new teachers, from coordinating groups of teachers known as Professional Learning Communites to overseeing student services and testing. She's not exactly dismissive of the award, but she's quick to put credit for it elsewhere, from Dossenbach, who she said has structured the school's administration in a way that highlights each member's talents and abilities, to her fellow assistants and faculty members.

“The way Dr. Dossenbach has got us set up, we kind of divide and conquer. He's got us in places that play to our strengths. He's had the foresight to put us where we shine,” she said. “I'm just so grateful for the team here, and (the award) is only because I've been able to work with them and because of the opportunities that have been laid in front of me.”

Dossenbach said Poston is crucial to the successes Southern Lee has experienced over the years.

“She's a valuable member of my administrative team and I cannot imagine doing my job without her input and support. I know from experience that she has the best interest of kids at heart and is determined to make the high school experience the very best it can be for all students,” he said. “I can say without hesitation that this recognition is well deserved.”

“We’ve all been walking around feeling pretty good,” she said with a laugh. “But I’m a pretty straight shooter. I’m very practical, and it sounds really corny, but I just love what I do and I think it resonates.”