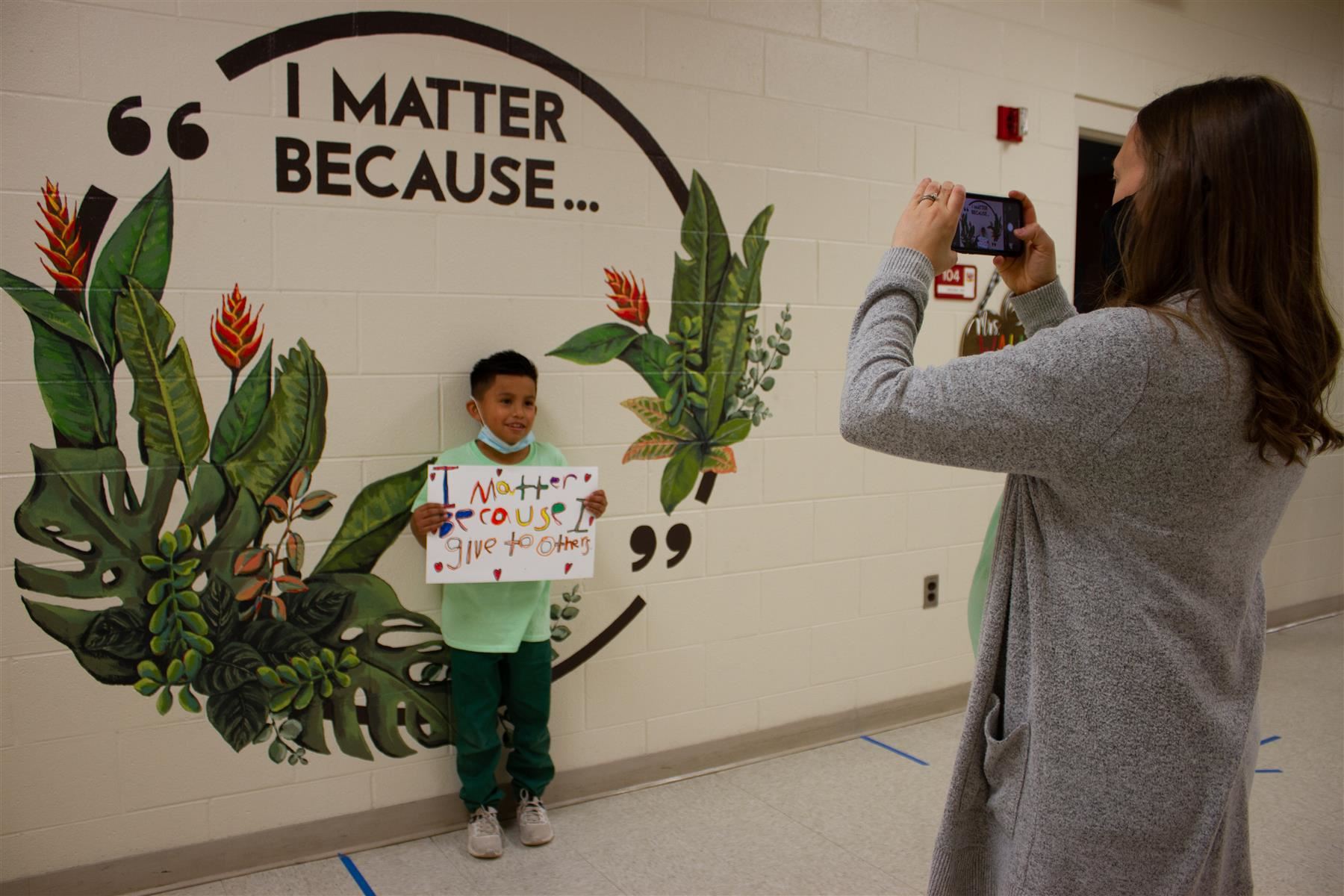 Broadway Elementary Guidance Counselor Amy Rosser taking a student's photo in front of the "I matter because..." mural.

SANFORD — Now more than ever, the importance of social emotional health has never been greater, which is why Broadway Elementary decided to make time to teach students about mental health and “Why You Matter.”

During the pandemic and school closures, administrators, teachers, counselors and school staff have worried not only about their students’ educations, but also about their mental health.

Broadway School Counselor Amy Rosser and Art Teacher Kayla Chamberlain wanted to do something to emphasize the importance of mental health, which resulted in the first annual “Why You Matter” spirit week. Students were encouraged to participate in each day’s theme — from wearing pajamas to school for “you matter because you have big dreams” day to wearing crazy or silly socks for “you matter because you’re one of a kind” — while also learning about what mental health is, how to have positive self talks, boost confidence and more.

In addition to the various lessons on mental health throughout the week, both students and staff also created posters answering the prompt “I matter because…” and coming up with their own unique responses. Things like “I matter because I’m gentle” or “ because I love my mom” or “because I’m kind” are just a few. Everyone who created a poster, both virtual and in-person students and staff members, had their photo taken in front of the “I Matter Because…” mural.

The photos are now hanging up around the school and are also posted on the Why You Matter website photo gallery for all to see (click here to see the photos!).

“The value of this being a visual gallery is immense,” Chamberlain noted. “Students are excited to (once the pictures were hung up they were so eager to see themselves and their classmates) see themselves proudly proclaiming something. It makes them see how they are a vital component in the community that we have here at Broadway, that they are a part of something bigger than themselves. While we often tell our students this, the visual impact of it has been powerful and deep. We believe that this impact will be something that sticks with our students and staff, maybe subconsciously, for the rest of their lives.”

Students were given short pre- and post assessment surveys during the week that asked them to give a rating ranging from “strongly disagree” to “strongly agree” for statements like “I am unique and special,” “I can think of one thing I like about myself, “I deserve to be happy” and more.

Both Rosser and Chamberlain were heartened by the post assessment results.

“We were encouraged by all of the data, but even more so by the older grades, especially fifth,” Rosser said. “We think the students really enjoyed the video the last day about boosting self-esteem, which was reflected in their post assessment. In terms of understanding mental health as a concept, I think all the students now feel able to talk more freely about their feelings, confidence level and just in general about their wellbeing.”

“We think that this gave students more tools to use when opening up about their emotions,” Chamberlain added. “Seeing their peers and staff members reflect on why they matter was neat to see. I believe it helped them feel more comfortable opening up about their feelings. This was also a great introduction for students and a gateway for them to talk about their insecurities or what they don’t feel confident about.”

Because even during this week of discussing why people matter and working on self-esteem and confidence, students came to Rosser expressing that they felt unworthy of respect or happiness. “‘Why You Matter’ week was and still is a starting point for students,” she noted. “I think to me that has made the biggest impact — kids are thinking about why they matter and if they struggle to find a reason, the post test helps them talk about it with a set prompt.”

“Amy (Rosser) works with our students daily who struggle with self-esteem and self worth issues, which isn’t surprising given the stressors they face and the lack of emotional resources that are available for them,” Chamberlain said. “This week was a great time to get a lot of folks on the same page, and show students that we as a staff — and influential adults in their lives — believe that they matter.”

Check out Broadway’s Why You Matter website for additional resources to try with your students, families and anyone else who could benefit from learning about mental health and its importance here!